Turkey is a relatively fresh and untrodden path for affiliates. Verticals such as iGaming and Betting would be a great choice. Turkish people are rather reckless, they love casinos, football and sports betting. In this article, we will shed light on the country itself and the Turk mentality. We will also give some tips about the creatives.

The official name is the Republic of Turkey. It ranks 36th in terms of territory, which is 783,562 km². 97% of the country is located in Central Asia, 3% — in Southern Europe. Most of the territory is represented by the Anatolian Peninsula (or Asia Minor), while a smaller part is located on the Balkan Peninsula. Turkey borders with 14 states and has an advantageous position at the crossroads of routes connecting Europe with Asia, as well as the Black Sea with the Mediterranean Sea.

Here, embraced by the two seas we find one of the most beautiful cities in the world and the largest city in Turkey — Istanbul (formerly Constantinople). Other major cities are Antalya, Izmir, Bursa, Adana, Gaziantep, Konya, and Ankara — the capital and second Turkish city in terms of population.

Turkey is a presidential Republic and has a de jure democratic system. However, according to the Democracy Index, the country is classified as a hybrid regime (a combination of autocracy and democracy, that is, political repression and legal political strife often coincide.)

Turkey is home to 83 million people, the world’s 19th largest population. The share of the urban population is 75.5%. The distribution of population is extremely uneven — 25% of people live in Istanbul and Ankara, the coasts of the Marmara and Black seas are densely populated too, as well as areas adjacent to the Aegean Sea.

The majority of the population is Turkish (48–65 million), although all citizens of the country are considered to be Turks according to the country’s Constitution. The second largest group is the Kurds (6–11 million). The minority groups are constituted by: 1.5 million Circassians, 0.5–5 million Crimean Tatars, 0.4–4 million Greeks, 1–2 million Arabs, 1 million Albanians, 700 thousand Romani (Gypsies), 600 thousand Persians, 500 thousand Turkmens and 300–500 thousand Russians.

The official language of the country is Turkish. In addition, Kurdish, Azerbaijani, Kabardian and others languages are quite common. Very few people speak English — these are mostly students and those employed in tourism. For this reason, all creatives should be in Turkish.

The Republic of Turkey is a secular country, meaning that religion is legally separated from the state, and every citizen has a right for religious freedom. Nevertheless, the country is very religious. The majority of the population professes Sunni Islam. The minorities are: Alevite and Shia Muslims, Christians and Jews.

The percentage of the literate population over the age of 15 is 88%. In general, the Turks are not very fond of reading, so we recommend using less textual and more visual information in the creatives.

The national currency is the Turkish Lira (TRY).

Turkey ranks 18th in the world in terms of economic power, 17th in terms of nominal GDP, and 13th in terms of purchasing power parity. It is one of the fastest growing economies in the world. Leading economists refer Turkey to the group of “Newly industrialized countries” — states that have experienced a significant increase in the quality of economic indicators over the past decades.

The industrial sector accounts for about 28%, agriculture — 15%, construction — 6%, service industry — 51%. Turkey is one of the world’s leading producers of agricultural goods, textiles, automobiles and spare parts, marine vessels, construction materials and household appliances. Tourism is another rapidly developing industry.

GDP per capita — $9,042. The average net salary is €750. The minimum net salary is €350. Employees in the IT, telecommunication, and finance sectors earn the most: €1250–1350. It is cheaper to live in Turkey compared to the European countries of the Mediterranean — $1000 is an average monthly spending.

The percentage of the economically active population is 47.2%. Contrary to the majority of European countries, the employment among women is low — only 27%. Current unemployment rate is 13.7%.

71% of the population has access to the Internet. 12% are connected to high-speed broadband Internet. 43% use the Internet via a smartphone. The desktop/mobile ratio is 28% to 72%. The Turks are very fond of smartphones, the daily usage is about 70 minutes, an average person picks up their phone every 15 minutes. Android devices are more common in Turkey than iPhones. Approximately half of smartphone owners use Samsung and only 17% prefer iPhone.

Other frequently visited websites include the “Gambling/sports Betting” category represented by nesine.com and tjk.org, as well as an adult website hdabla.net.

Social networks are an important part of life in Turkey. On average, Turkish people spend 1.5–2 hours a day surfing the social media.

In 2007, a restrictive law was passed to tighten control over the Internet, WordPress and Vimeo were blocked. Since 2014, any website featuring “offensive content” may be legally blocked in 4 hours without a court order. At the moment, more than 7,000 websites are blocked. Wikipedia is still not accessible.

Since 2013, Freedom House has classified the country as Not Free. Reporters Without Borders organisation ranks Turkey 149th out of 180 (between Mexico and Congo) in the “Freedom of speech” category. In times of political disturbances, social networks like Twitter and Youtube get immediately blocked.

Offline iGaming gained popularity in Turkey in the 90s. This was due to the rapid development of tourism. The resorts were flooded with holidaymakers heading for the hotel casinos. At the same time, the Turks themselves also became addicted to gambling. Nowadays, about 30% of the Turks gamble regularly.

However, in 2007, the government sought to protect the citizens from this addiction and banned both offline and online games. Violation is punishable by a fine not only for the gambling house, but also for the players. However, in real life, fines are extremely rare, as this industry is rather difficult to keep under control.

The Turks are very emotional, reckless and open-hearted people. Passion and patriotism are in their blood. If something hooks them emotionally, they devote themselves to it completely. This applies to national holidays, national football team victories, political protests, and, of course, gambling. The latter arouses very strong emotions.

Despite all the restrictions the Turkish players often visit online casinos. They gamble away about $ 1.5 billion a year, which is equal to 10% of the total volume of online trade in Turkey. 90–95% of the players are male, although some women also love gambling. People play in their free time — after 20:00 during weekdays and on weekends. During the working hours, traffic drops down significantly.

Various VPN services and gray-hat Internet providers are thriving in Turkey. UCash and Paypal also face no restrictions, so making deposits and withdrawing winnings is easy.

As we have mentioned before, the Turks are not fond of reading and feature limited knowledge of English. Therefore, all the creatives should be in Turkish, keep the text to the minimum and focus on the visual side. No Turk can leave a photo of a beautiful seductress without attention. Football-themed creatives also perform well. In terms of color combinations, we recommend using variations of blue with white, yellow/orange with white, and the colors of the national flag (red with white). Do not go heavy on red, it may irritate the users.

Turkish players also love welcome no-deposit bonuses, free spins, promotions and other gifts. The Turks want to get a gift first, and then decide whether to continue playing in this casino or not. The average reg2dep rate is 12–14%. If you mention money on the creatives, convert everything into the national currency — Turkish Lira.

Sports betting has been officially banned in Turkey since 2007. The exception is the state-owned company IDDAA, which has the right to offer betting services. You can also legally bet on horse racing on the official website of the Jockey Club of Turkey.

However, no law can stop the Turkish people from gambling. Online betting providers are very common and accessible via a VPN.

Football is extremely popular in Turkey. Everyone supports one of three teams: Galatasaray, Besiktas or Fenerbahce. Tempers run high at the start of Turkish football championship, which begins in August and ends in May.

Basketball, volleyball, and racing are also very popular (Turkey has recently become a host of a Formula 1 track). In addition, eSports has gained popularity. There is a 24-hour TV channel covering the eSports events. The League of Legends is one of the favorite games. Tournaments with a prize pool of $20,000 and more are frequent.

Usually bets come from men aged 18–35 who visit betting sites on weekdays after 20:00 or on weekends. Bets are most actively placed on the days before sports competitions.

As far as creatives are concerned, football-themed ones perform really well: beautiful girls in football uniform, famous local football players, soccer balls; as well as promises of big winnings, images of money and depictions of a beautiful life. A useful keyword for your SEO and apps is “iddaa” (a state-owned company where people can place bets legally).

To activate the offer, contact us in Telegram: @NinjaAnna 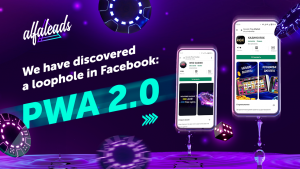